You are using an out of date browser. It may not display this or other websites correctly.
You should upgrade or use an alternative browser.

mark the shark said:
YXRC and YPZ clutches should be 18mm x 1.5 thread.

Bearing Info for the Vmax 4

Bearing Info-- Wanted to put together a reference sheet for Bearings. Everyone’s personal budget will dictate the bearings they use--- After doing some research this past summer I decided to replace my skid bearings w/ less expensive Chinese Bearings, and replace my chain case and spedo bearings w/ higher quality KOYO Bearings. I made this decision after meeting in person with a manager at Bearing Headquarters. He explained to me that there is a HUGE difference in cheap (Chinese) bearings and higher quality (Japanese or German) Bearings. Yamaha NOS bearings are KOYO (Japanese), and I was able to get replacement KOYO t bearing headquarters for 50% of NOS from Yamaha.

dominicturbo said:
If you wish run 180 with stock CDI use only one pick-up coil for both signal.
Click to expand...

Found the sound rating tag for my sled before the PSI pipes. 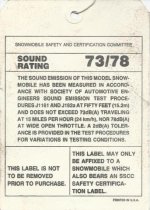 I scanned this a long time ago, don't know if I've posted it on the site or not.

These were originally posted by YAMMIEGOD3:16 to the old site.

4x4 said:
Please don't use the word scrap in the same sentence as snowmobile parts. I guarantee I am using parts that are worse than your scrap and will be happy to buy and use them.
I am especially looking to buy bent Vmax-4 bulkheads.
Click to expand...

JAMIE said:
I thought I would post this info again since I couldn't find it on the site.

Vmaxmike said:
Oh after careful review I believe I found the cause of my failure..... The o-ring under the needle set was bad on the carb the caused my hydro lock. I didn't know these carbs had the filter or o-ring until now. If it's news to you too, ya might want to look next time you clean your carbs. I had a bit of crud in a couple screens and a $.040 oring cost me $600 in crank repair and rebuild costs.

Vmaxmike said:
Back together .... Thanks Mark.

Here are a few pics and a explanation. Install the pivot shaft into case first, the spring has a short tail and a long one. Short goes to the rear of the case, long to cover side. Leave the gears on the bench and install the spring and idler arm w/bearing on to shaft. Let it swing up to the top spindled shaft so the spring has little to no tension. Once everything is slid on to the pivot shaft then swing the idler arm down to tension the spring, hold it there and install the gears and chain. Having an extra hand helps with this part. Oh and remember to back the bolt out that sets preload on the chain, makes it easier to install the gears and chain.
Click to expand...

speedmax4 said:
I wish I could take credit for this simple idea but I saw it on the Schmidt Bros. web site. It's one of those deals that you wonder why didn't I think of that or why didn't Yamaha. It will definately prolong the life of the bearings and bushings in the front suspension steering scissors and makes keeping them greased easy. It was easy to do and cost less than $10.00. I picked up some 6mm grease zerks, you can buy a 6mm tap for about $3.00, and used a 3/16 drill bit. Spent very little time installing them and it works great. Tom
Click to expand...

AL P said:
sure, no problem..I think the 1996 seats, are only a little over 1 inch higher...but the way they feel, it`s almost as if they used some kind of different pading? or added a softer layer on top of the old version? tomaro i`ll be uncovering the sleds, so as to move them and i`ll try to measure for sure the hieght difference...

as far as telling them apart..here ya go..

1995 VMAX 4 SEAT OEM Seat, almost a straight stitching pattern on the side

differences towards rear of seat (the trunk area is not as high above the seat on the 1996 seats..)

Vmax seat question (how thick is the wood?)

Vmax540 said:
Linseed oil will keep a solid plywood bottom from rotting. I go to an auto parts store and buy a semi hard plastic ~3/16"x36"x48" truck mud flap for $12.00 and replace at least 2 bottoms with no more rotting or holding water !
Click to expand...